Sebastian Maniscalco is a stand-up comedian who was born in Chicago and grew up in Arlington Heights, Illinois. He has appeared on Comedy Central and late night shows such as “Conan,” “The Tonight Show Starring Jimmy Fallon,” “Late Night with Seth Meyers,” and Jerry Seinfeld’s “Comedians in Cars Getting Coffee.”

Said by The New York Times to have his “own kind of panache” on stage, Sebastian has performed four separate hour-long specials. His first special, Sebastian Live, was released in 2009. His next three specials—What’s Wrong With People (2012), Aren’t You Embarrassed? (2014), Why Would You Do That? (2016)—aired on Showtime.

Sebastian’s father emigrated when he was fifteen from Cefalú, Sicily. His mother’s side came from Naples and Sicily.

What kind of lessons did your immigrant parents teach you about money?

I think my father and mother wanted to instill the work ethic in me at a young age and kind of tell me that nothing is given to you in this age. You have to work for it. You associate the pain and agony of doing jobs you don’t want to do, and when you start spending your money, you relate it to what it took to make it. You feel a little bit more pride and you’re more appreciative of what you’re doing just because you know the hours you logged to get to do what the activity was.

As you’ve said in your stand up, Italians tend to be passionate people. How has this encouraged you to pursue a career as a stand-up comedian?

I think being Italian and the way we communicate, there’s such a personality there. There’s an inherent funniness about the way Italians express themselves and behave that lends itself to a very humorous environment. Being Italian lends itself to standup comedy in the sense that the physicality and the facial expressions come with the culture. My first stage was the kitchen table.

What’s the toughest lesson you’ve had to learn on your way to becoming a successful stand-up comedian?

It’s more about the business than the actual standup. You wonder when it’s going to all start working for you as far as when you’re going to be able to quit your day job and do this full-time to put food on the table. You don’t become CEO overnight. You have to work your way up the ladder. And going back to the work ethic that I was taught at a young age, that kept me motivated enough to continue working hard and writing jokes and performing so one day I could do it for a living.

The first time I did standup comedy, I got booed off the stage. That was at Northern Illinois University, where I was going to school at the time. I opened up for the national headliner that was coming to the school, and I was lost up there—just didn’t know what I was doing. That was at the beginning, and I could’ve said ‘this isn’t for me’ and never went back. But I felt that I had the talent to do it.

You’re very animated in your stand-up. Did this come about naturally or did you consciously incorporate it into your routine?

I didn’t set out to do that. I think that kind of happened organically over time. As I got more comfortable on stage, I started to be a lot more expressive in my point of view. I think it was always there, but when you first start doing standup comedy, you’re very afraid. You’re not comfortable yet to let your true self show. Not that I walk around the house doing kicks and flips and stuff.

You got married later in life. What would you say to younger people who are looking for the same thing?

Sebastian is coming to a town near you!
Click here to information and to purchase tickets. 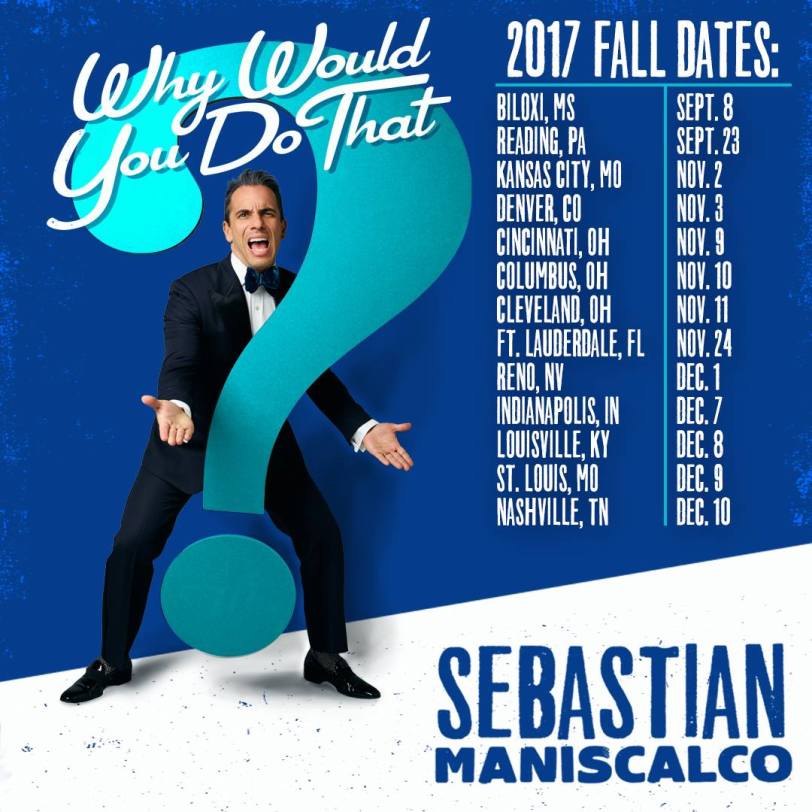 3 thoughts on “Piacere! An Interview with Comedian Sebastian Maniscalco”